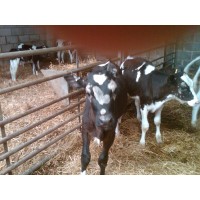 Ringworm is the most common skin disease in cattle due to it being highly transmittable. Ringworm is a fungi. It can be also passed on to humans. Symptoms are circular raised grey areas usually around the face most commonly seen more around the eyes but can be in other areas such as ears, neck and back of the animal. Ringworm will gradually heal its self over time if untreated but can take up to around 9 months to clear. There are some antiseptic sprays which can be used. You're best trying to prevent it by disinfecting between each batch of cattle and making sure that the is enough air flow through your building. Our TK Swordsman disinfectant is proven to kill Ringworm fungi. Over stocking your buildings can lead to a spread of ring worm.