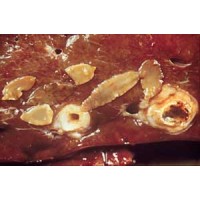 Liver fluke disease or ‘Fasciolosis’ is a common disease which can affect both cattle, sheep & goats, plus other species. In the UK it is estimated to cost the cattle industry £23 million per year.

It is most commonly seen in animals which have been grazing and can be present in both dairy and beef cows, as well as all ages of sheep.

It is caused by the flat-worm, Fasciola hepatica which has a relatively complicated life cycle of which part must be spent in a snail. These snails need moisture and relatively mild/warm temperatures to live and therefore wet summers are ideal for supporting large numbers of snails which could be harbouring infection. Problems can also occur on dry summers, as both the snails and grazing animals are concentrated in the boggy areas.

Between August and October, cercariae are released from the snails which then mature into metacercariae. These are the infective stage of the parasite and they can lie dormant in the environment for months to infect cattle which ingest them.

The liver flukes then mature in the final host (Cow, Sheep, Goat etc.) until the winter which is when symptoms appear. The flukes burrow into the liver causing fibrosis and impairing liver function as they head toward the bile duct. The adult fluke finally attach inside the bile ducts. It is loss of protein and liver damage that give rise to the symptoms which include the following:

Treatment of the cattle and sheep involves giving an effective flukicide. Although effective at killing fluke, recovery can be slow due to the damage that is already done. Treated animals should be moved to clean pasture where possible and given increased feed to restore body condition and production.

Although prevention measures such as fencing off areas with a large amount of snails have been suggested, the most practical and effective way to control fluke infection is through strategic use of flukicides in animals already on your farm and treating any bought in quarantine. This should be done under the advice of graham Shepherd (our Vet), your Vet or an SQP. For dairy cows, milk withdrawal periods are likely to heavily influence the timing of treatments and also the treatment that is used.