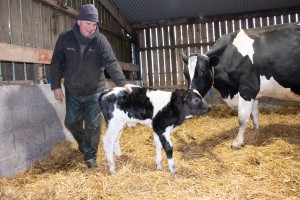 “Established 1780,” says Gerald with quiet pride should he be asked how long this farm has been farmed by the Watkin family.

However, Gerald uses new ways of doing things to benefit his herd. Over the last year he has been pasteurising colostrum to kill bugs and so has slashed calf illness, mortality & antibiotic use. 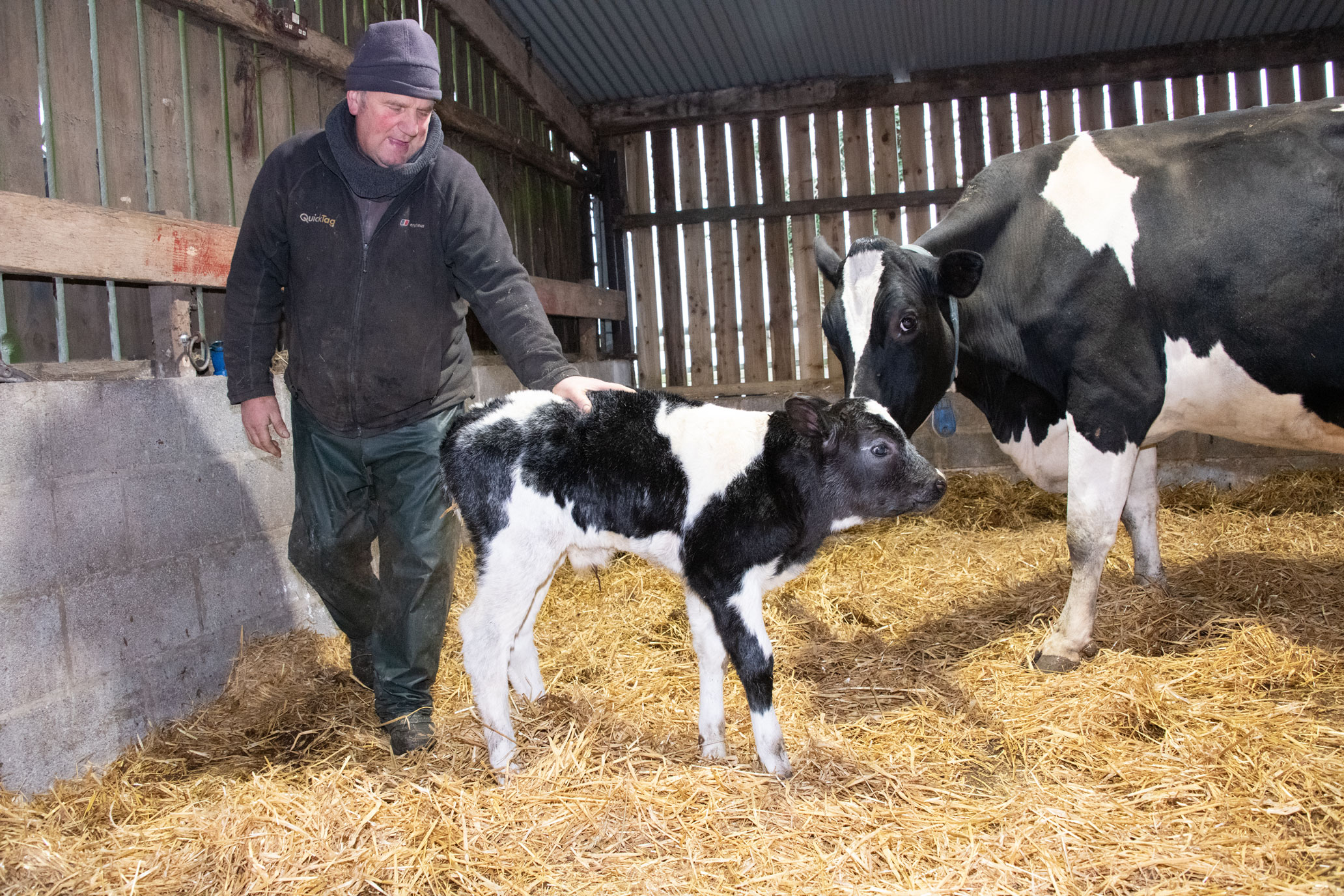 Gerald is impressed by the improvements and return on investment in one year alone:-

Mr Watkins tells us about his farm- The distinctive white farmhouse of  is on the south-facing slope of a gently-contoured valley located a little north-east of Aberystwyth in Ceredigion. A second unit just across the valley accommodates the dry cows using a large and well-ventilated converted former sheep shed.

Now mainly milk-producing, all the farm’s milk goes for making the distinctively-branded Dragon Welsh Cheese – which is manufactured in Pwllheli on the Lleyn Peninsula by a farmer-owned co-operative of 130 milk producers.

The milking herd comprises 290 pedigree Holsteins producing an average of 9600 litres per year at 4.0% butterfat and 3.25% protein. This year 2000 tonnes of grass silage was clamped from five cuts, with an additional 60 acres of wholecrop wheat and 24 acres of fodder beet being grown

Twice-a-day milking is through a 20:40 swing-over parlour. For several years agriculture students from Aberystwyth University have provided an additional labour input at Henllys Farm, helping with milking at weekends and other times.

On the immediate horizon for next year is a move to increasing the farm’s slurry storage capacity to being enough for 5 months production volume. The NPK of the farm’s slurry is already analysed and the aim is to be maximising the potential for using slurry nutrients most effectively in the agronomy of both grass and other cropping.

A mixer wagon is used for TMR rationing and feeding out. High yielders are AYR housed with the low yielders at grass in the summer. With an objective of making maximum use of home grown forage an independent nutritionist monitors performance with advice input on any ration adjustments.

Calving is mainly autumn-block, beginning in August. Sires are chosen firstly on fat & protein– both being important for maximising return from the creamery contract – and also for and health traits.

With the aim of producing 100 heifer calves overall, sexed semen is used in November and December for two services only, helping select for fertility. Beef semen is then used for subsequent services.

The superior cows are also served to sexed Holstein semen, with the other cows receiving British Blue and Limousin straws, both being selected on ease of calving. Surplus heifers are reared for sale and all of the beef-cross calves are reared on for sale as stores at Tregaron market.

Heifers are targeted to calve at two years, with milking heifers being housed together in their own separate cubicle shed, “Keeping the heifers separately reduces any bullying and brings them back together with their mates after calving,” said Mr Watkin.

Mr Watkin believes management of the dry cows to be a particularly important job, looking after them through this important period himself. His dry cows are kept as one group, bedded on sand, and receiving a high wheat straw (6kg) TMR.

One notable in the dry cow accommodation is the positioning of the neck rail, being well forward of the feed barrier so that the cows are only rarely touching it. “Feed intake is well above target in the dry cows” said Mr Watkin, who places high importance on cow comfort. The main herd’s housing has both automatic fans and an automatic lighting system which is set for 18-hour “summer” day lengths to help encourage feed intake and favour good fertility.

Calving begins in August and with sires being selected for ease of calving, problems are few. “We rarely have to pull a calf; the secret is to keep stress on each cow to a minimum by always letting her keep her own group in sight and by giving her plenty of time before thinking about any intervention,” said Mr Watkin, “cows are herd animals; separating them away from the herd at calving is opposite to their natural behaviour.”

Attention to detail in colostrum management plays a key part in the calf-rearing process. “Total hygiene is important at all stages, starting with how the colostrum is collected,” stresses Mr Watkin.

To help manage the cow while collecting the colostrum a calving gate is fitted into the calving pen where clean straw is used for bedding. The colostrum is harvested within six hours of calving using a portable mini-milker supplied by G Shepherd Animal Health. “The machine is well-made and works very well. It has a good vacuum and plenty of capacity … and it was a good price,” said Mr Watkin. 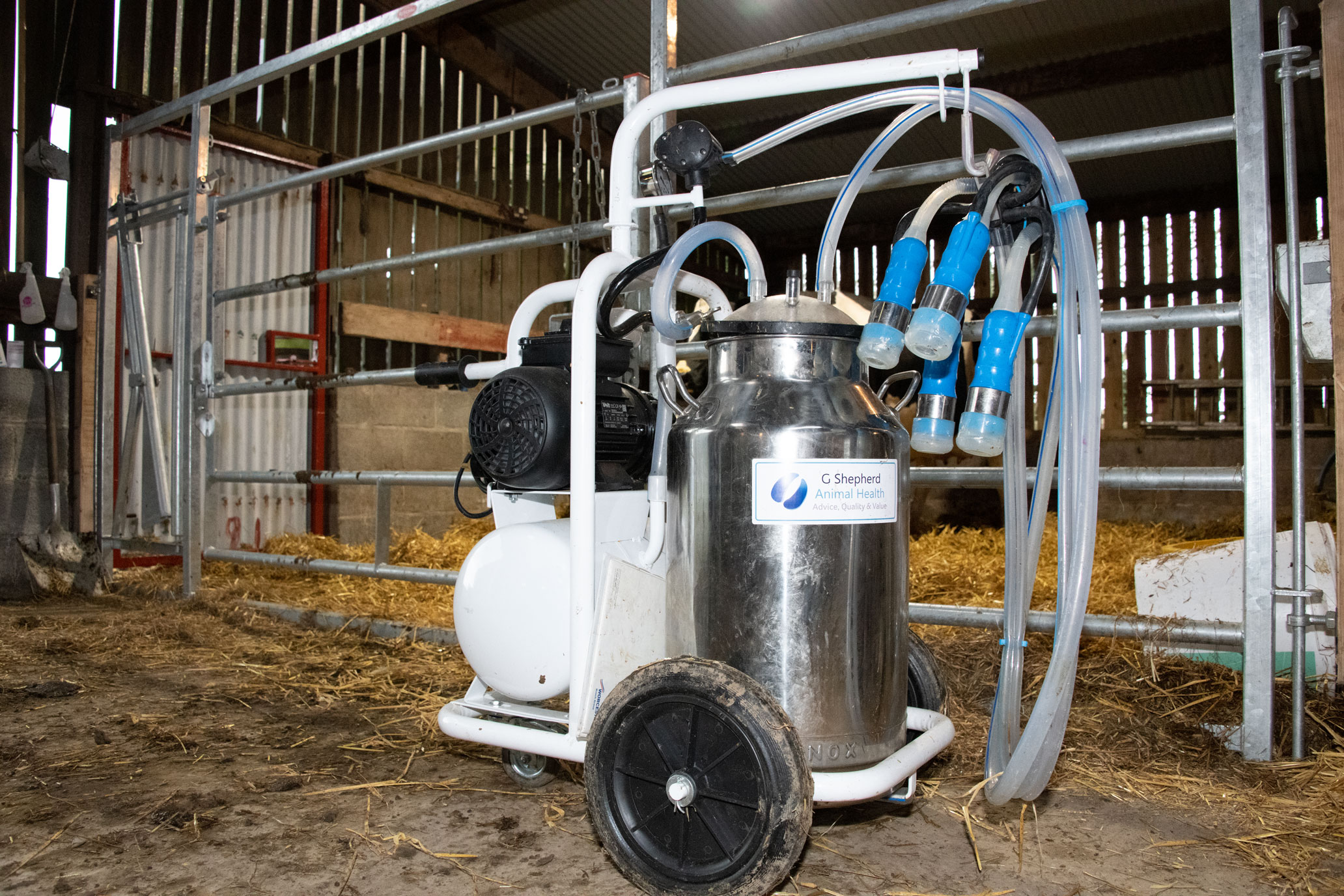 Once collected the fresh colostrum is transported to the pasteuriser using thoroughly cleaned and sterilised buckets. “Well, would you like dung in your lager?” asks Mr Watkin with a smile.

The colostrum management system uses the colour coding of Perfect Udder colostrum bags to ensure that calves are receiving the right amount of colostrum at the right time.

“We aim to be giving ten percent of the calf’s bodyweight for its first feed – which is always given as soon possible after birth, tubing the colostrum directly into the stomach if necessary. Most of our calves are between 40 and 45 kg so the first feed is always a blue four litre bag.

For the next three days the calf gets twice-a-day feeds with the three litre grey bags,” explains Mr Watkin. 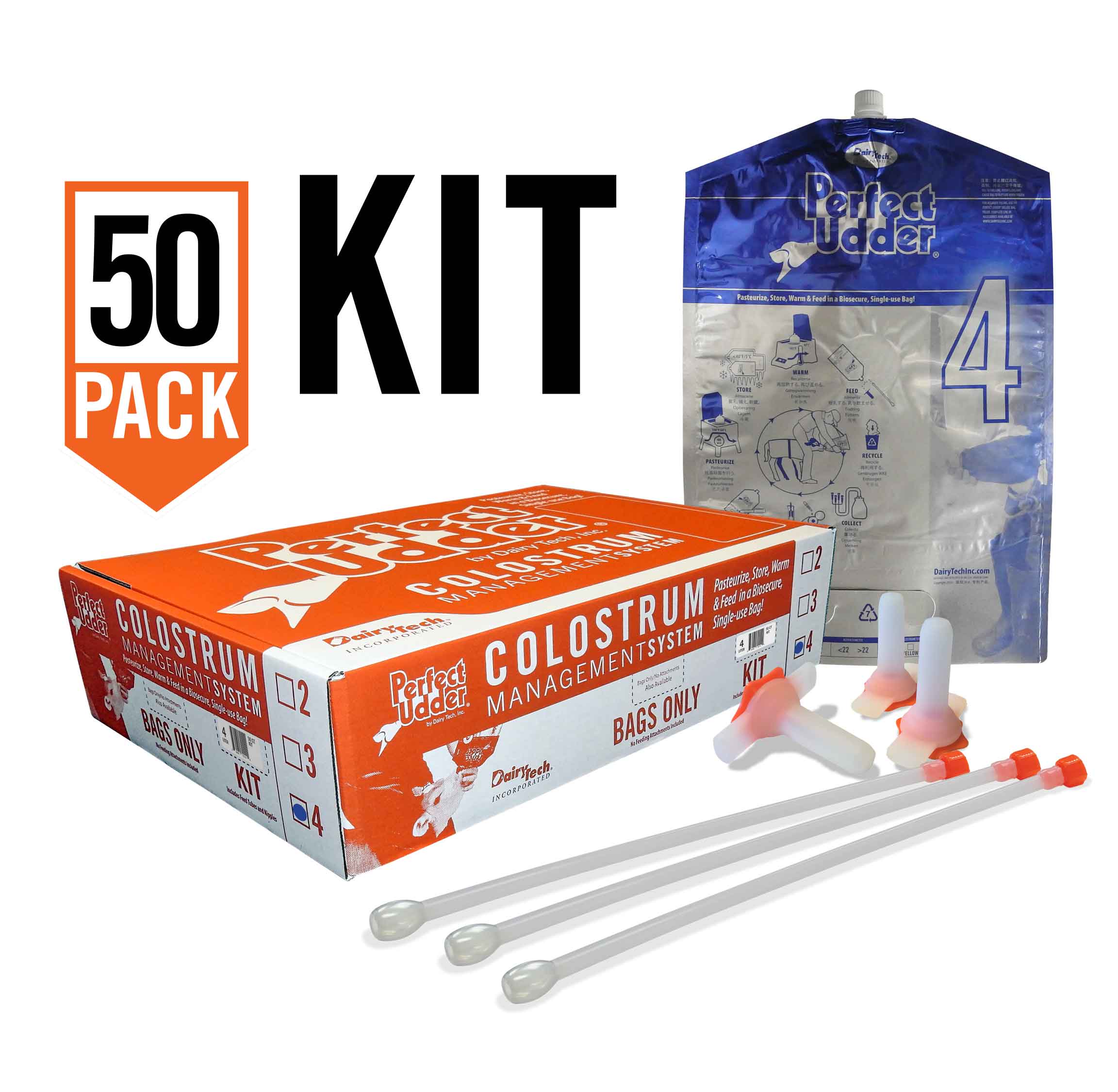 “The four days of pasteurised colostrum gets the calves off to a good start, and the colour-coding of the bags is very helpful for ensuring that whoever is on calf-feeding duties is always giving each calf the right amount.”

A decision taken in January 2021 to start pasteurising the colostrum has transformed the health of the calves at Henllys Farm. “Since beginning pasteurising, calf mortality to eight weeks is now just one percent and it had been as high as six or seven percent before. Also, and very importantly, the use of antibiotics, which had been quite high at times, is now negligible,” said Mr Watkin. 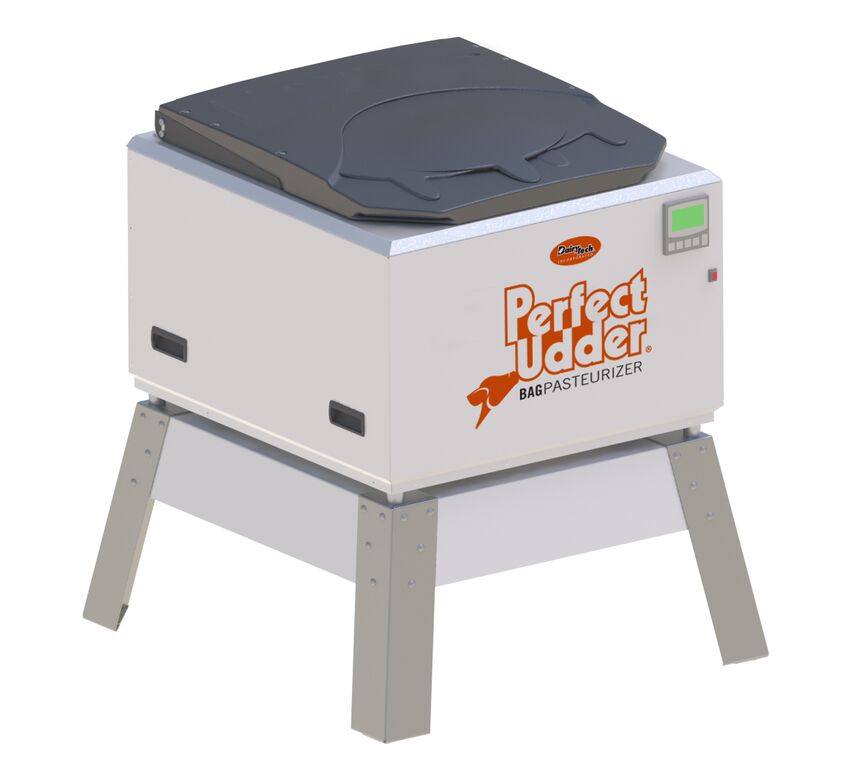 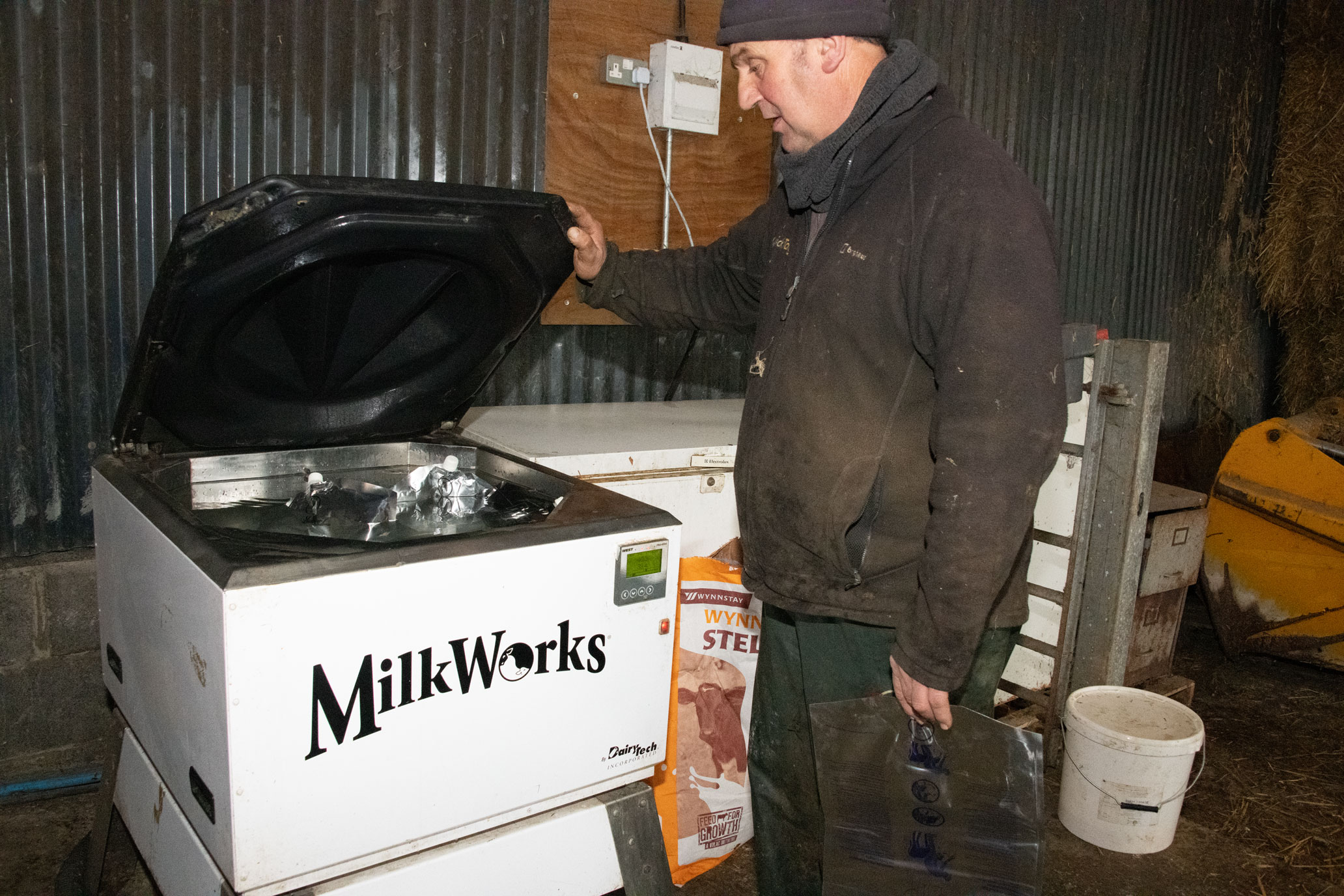 (also supplied by G Shepherd Animal Health). Pasteurising colostrum has very specific temperature control parameters: too hot and the colostrum’s protein immunoglobulins denature and so lose their capacity to act against harmful organisms in the calf; too cool and the harmful pathogens naturally present in all colostrum are not neutralised.

Dr Graham Shepherd adds "feeding raw colostrum may be bringing harm to the calf as well as being beneficial can easily be overlooked. The possible risks include Johne’s & Salmonella transmitted from the cows udder, plus a longer list including E. coli, Mycoplasma, Rotavirus, Coronavirus and Cryptosporidiumthat can be introduced through contamination on the journey from harvesting to feeding." 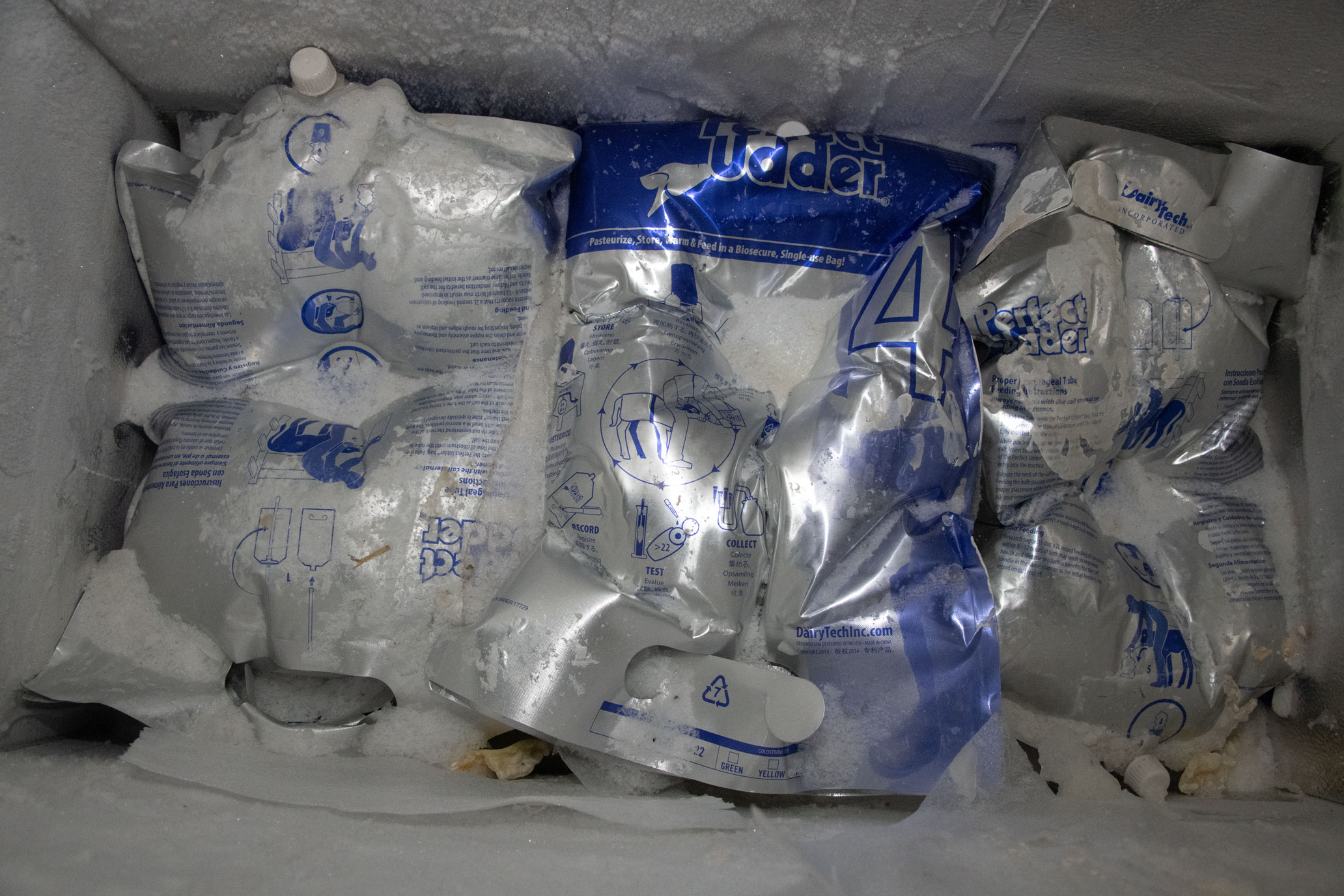 As well as performing the pasteurisation process the MilkWorks unit quickly and safely thaws the frozen colostrum bags as required for each day’s feeding. The unit has automatic settings for either pasteurising or thawing and the water is constantly being circulated to ensure even heat transfer.

Following colostrum feeding the calves through teats the calves are fed for two weeks in individual straw-bedded slatted pens with each row facing another row and keeping calves in sight of others at all times. Whey-based calf milk replacer feeding is via nitrile teats in readiness for moving onto a computerised system. Locally-supplied coarse calf-mix with high palatability, and barley straw are both fed ad lib. The slatted design of the calf pens allows every pen to be individually steam-cleaned between calves. The pens are also disinfected with “TK Swordsman” 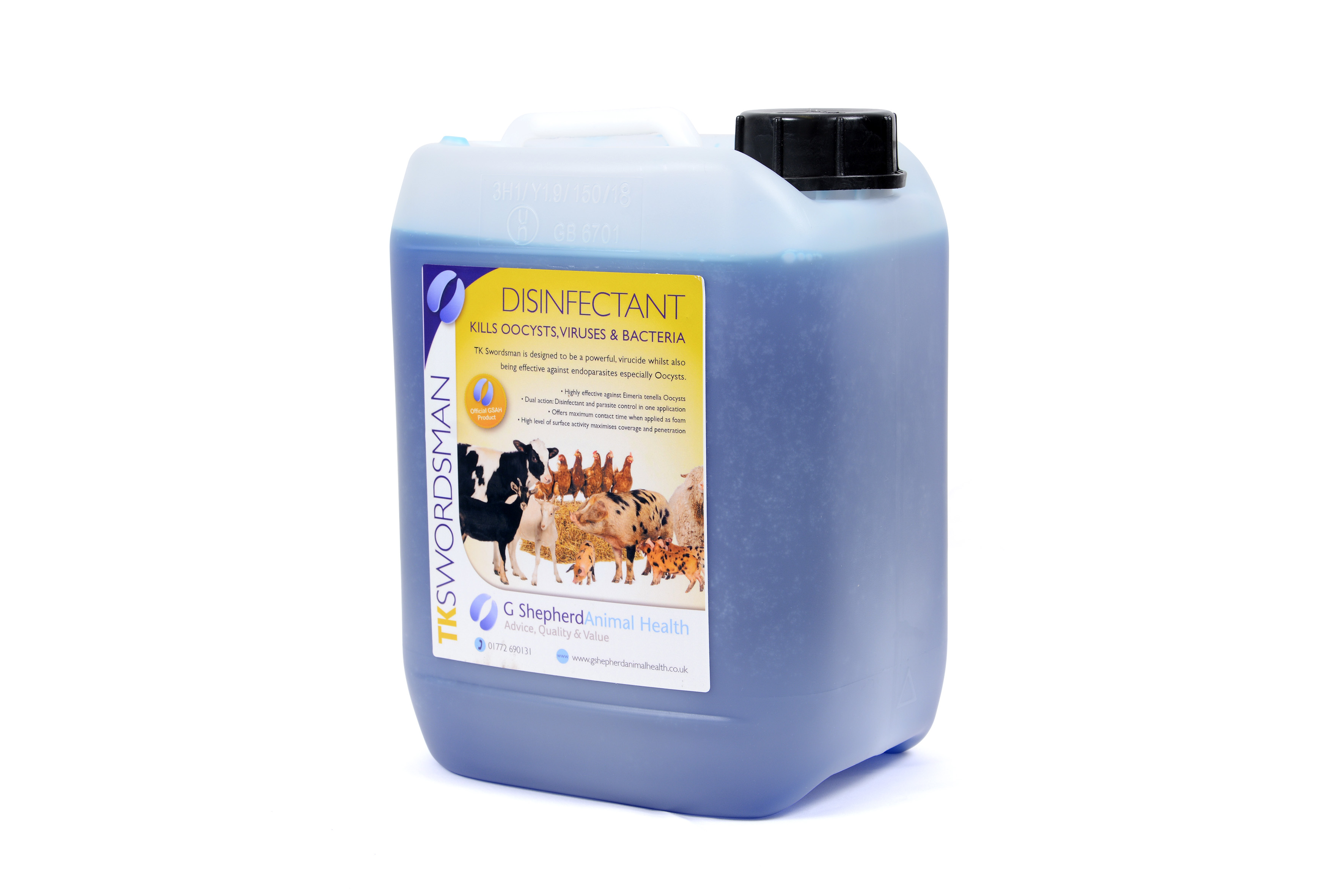 a disinfectant specific for calf housing.

After a fortnight in the individual pens calves are grouped into batches of 20 for a further seven weeks on a collar-based computerised milk feeder, with weaning occurring automatically as the feeder incrementally reduces the milk being delivered by 0.2 litres a day over a programmed two week weaning period.

In summarising the benefits for calf-rearing he has seen since changing to pasteurising colostrum rather than feeding raw colostrum, Mr Watkin said, “My only regret about getting the pasteuriser is that we didn’t buy one five years ago. I had thought that it would add some work, but instead it has simplified colostrum management and helped us to organise it.

“Our calf health is greatly improved now, with virtually no mortality or need for antibiotics. There is a great financial saving and we are rearing calves that will make better cows – it has proved to be a real ‘win-win’ for us.”

Use of hygienic colostrum handling, pasteurisation of colostrum and disinfection has proven to be a effective strategy in improving calf health and rearing efficient cows, and reducing antibiotic use. Efficient cattle have a lower carbon footprint. Also using techniques like this aligns with government policies on reducing antimicrobial resistance (AMR), such as DEFRA Animal Health and Welfare Pathway, 5 year plan for antimicrobial resistance, 2019 to 2024.