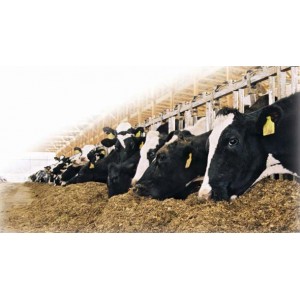 An apple flavoured energy supplement for dairy cows containing monopropylene glycol and glycerol. Useful for cows at risk of ketosis in early lactation. ME is approximately 20 MJ /kg DM

or
Make an enquiry

Dairy herd studies show that an average of around 30% of UK cows are at risk of ketosis, most of these having hidden ketosis with no obvious symptoms.

For multiple reasons cows developing some degree of ketosis is an embedded problem on dairy farms.

The condition is a metabolic one meaning that the energy required in early lactation is not being matched by the energy being supplied from feed.

Body fat is mobilised as a normal process to compensate for the energy shortfall. The cow develops ketosis if her liver becomes overloaded with the quantity of mobilised fat needing to be processed.

Cows with ketosis have lowered yields, poorer fertility and are at increased of a range of other problems including having a difficult calving and/or a retained placenta, developing milk fever, having a displaced abomasum, and being more likely to suffer mastitis.

NRG contains both monopropylene glycol and glycerol, this formulation allows a higher quantity to be fed so in effect the cow is receiving 1.75 times as much energy per feed compared to straight propylene glycol. Apple flavoured for palatability, 500ml per day should be fed divided across two or more feeds.

Not all cows will require NRG, cows most likely to be at risk of ketosis should be supplied including;

NRG is also recommended for the first seven days after calving for:

4) Cows losing too much weight when dry e.g. losing over half a BCS

5) Cows having a difficult calving

Although not a licensed Veterinary Medicine, NRG can be fed in cases of Ketosis to support the energy levels of the cow and to feed directly into the TCA cycle / Krebs cycle. In such cases give the cow 250ml  twice daily for 3 days. The cow should be examined for other reasons causing the ketosis as it could be secondary to LDA, RDA, metritis, lameness for example. If in doubt, call your Vet.

NRG Liquid Energy may be fed in complete diet feeders, forage boxes, incorporated into home mix rations or poured over forages. It may also be used as an oral drench mixed with water under the supervision of your nutritional advisor.

NRG Liquid Energy can also be dispensed using a Dosatron proportioning device to give up to 500ml per cow per day. This is useful for groups of dry cows in the transition period, upto 300ml per head per day, upto 1% max concentration in the drinking water. We supply liquid feeders that attach to Out of Parlour Feeders or milking Robots and these can be fitted by our engineers if required.

NRG Liquid Energy  is available in 25 litre, 200 litre and 1000 litre sizes and is available through farm health distributors, contact us on 01772 690131 for your nearest stockist.

G Shepherd Animal Health also delivers direct to farmers. Free next-day on-farm delivery is available either using the 24-hour online form or by calling us on 01772 690131.