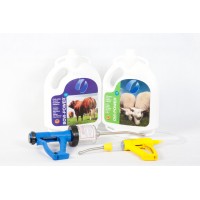 Firstly, don't over supplement! Minerals and Vitamins can be toxic in excess. Examples of this are:-

Minerals do interact with each other in many ways, reducing each other’s absorption or effectiveness. Chelation is a process where a metal ion is enclosed in an amino acid, thus protecting it from interactions and increasing its absorption with the amino acid (protein building block).

I cover some of this material in another article - Keeping Mins & Vits balanced .

It is important to get the "Macro-minerals" right first. Macro-minerals are those needed in relatively large amounts, in terms of grams per day per cow:-

Next it’s the "Micro-minerals", needed in milligrams or micrograms. The ones we generally consider are those that are limited in the diets at particular times:-