With digital dermatitis now being implicated in non-healing hoof lesions its control is becoming more important than ever.

She says: “Digital dermatitis is often described as ‘mastitis of the foot’, so footbathing can be considered the equivalent to teat dipping in mastitis control.

“It can also help harden the hoof and make it less susceptible to penetrating injuries or shearing forces.”

Selecting which cows to footbath and when is also crucial since dry cows and youngstock are often left out of treatment regimes, says Miss Pedersen.

However, it is important to treat all at-risk animals - even the bull if he runs with the cows, she says.

“Although the frequency of footbathing needed to keep infection under control will vary from farm to farm, in general the more frequent the better.”

“Footbath design is crucial to making the process easy for both yourselves, the cows and, more importantly, ensuring you get the most out of your product.

“A footbath is most effective when incorporated into the cow’s normal daily routine, so on the exit of the parlour is a popular place.

“The more accustomed the cows are to passing through it, the less disruption there will be to cow flow and the less contaminated the footbaths will become.”

There has been a lot of debate about whether a pre-wash bath is necessary or not, says Miss Pedersen.

“The most recent advice is to avoid the use of two baths unless there is a gap of more than 2.5 to three metres before the treatment bath to ensure it stays clean,” she says.

“If a pre-wash bath is used, then it should contain the treatment solution at a lower concentration, rather than water, for example 2.5 per cent copper sulphate in the prewash and 5 per cent in the treatment bath.

“In terms of construction, a ‘built-in’ concrete footbath, rather than a plastic one, can be more comfortable for the cows and will not move when they pass through it.

“Comfort and cow flow can also be improved with a rubber lining.

“Good cow flow is important as it helps to reduce faecal contamination and displacement of the footbath contents.

“Although very popular, rigid plastic baths with pronounced ridges on the bottom are uncomfortable and are not recommended.”

As well as considering cow flow when designing a footbath, it is important to pay attention to its position and how easy it is to fill, empty and clean out, she says.

“The easier it is to maintain, the more frequently you are likely to use it. Automatic footbaths which empty and then

refill themselves after a predefined number of cow passages are a cost beneficial investment and make footbathing an easy job and not a chore.”

Length, width and depth of the bath are also critical, says Miss Pedersen.

“Ideally cows should place each foot in the solution at least twice and not be able to jump the bath, therefore a length of at least 3m is required.

“It should also be wide enough to ensure cows are not able to straddle it or walk with one foot in and one foot out of the bath.

“Research carried out across five countries concluded that the optimal dimensions to ensure sufficient ‘dunks’ of each foot, while minimising footbath volume were 3-3.7m long and 0.5-0.6m wide with a 280mm instep.

“In certain situations, a wider bath which allows two cows to pass through side by side is necessary to aid cow flow.

To ensure feet are completely immersed in the footbath solution, it must be deep enough to allow it to be filled to a depth of about 100mm, advises Miss Pedersen.

“Despite the widespread practice of footbathing and its importance in lameness control, there are relatively few robust clinical studies on the effectiveness of the various agents which can be added to the bath.”

When deciding what to use, the following should be considered: ease of use, disposal, cost and, most importantly, does it work, she says.

“It is a common belief that footbathing agents act as ‘treatments’. However, in reality most are disinfectants and have a preventative action, much like teat dipping in mastitis control.

“While there may be a number of different agents to choose from, it is important to remember they are unlikely to work if they cannot get to the target area.

“The full potential of the agent will not be achieved if the cows’ feet are dirty on entry or do not receive sufficient numbers of ‘dunks’ in the bath.”

Accurate measurements of the footbath must be taken to determine its volume when full so sufficient agent is added to achieve the desired concentration, says Miss Pedersen.

“As a general rule of thumb, the footbath should contain one litre for every cow which passes through it, so a 200-litre footbath must be changed every 200 cows, otherwise it becomes ineffective and can actually spread, rather than prevent infection.” 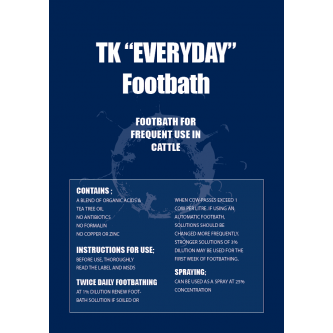